Hey, so I did something dumb (publicly) today, and I realized this was the third time this week. I thought maybe you could benefit from my dumbness and some of the thought process behind it. Here we go.

Today, I saw this in the Laravel codebase:

I thought to myself: “Wow, how cool. A try with no catch who’s sole purpose is to check if a class exists, if it does, return it, if not, keep going. That’s not something I would think to do, in fact, I didn’t know that was even possible, I better share this on twitter…”

I totally missed the fact that this is just a standard try/catch statement and down below, there is a catch statement clear as day (well it’s actually not, but you get it):

Here were the comments… 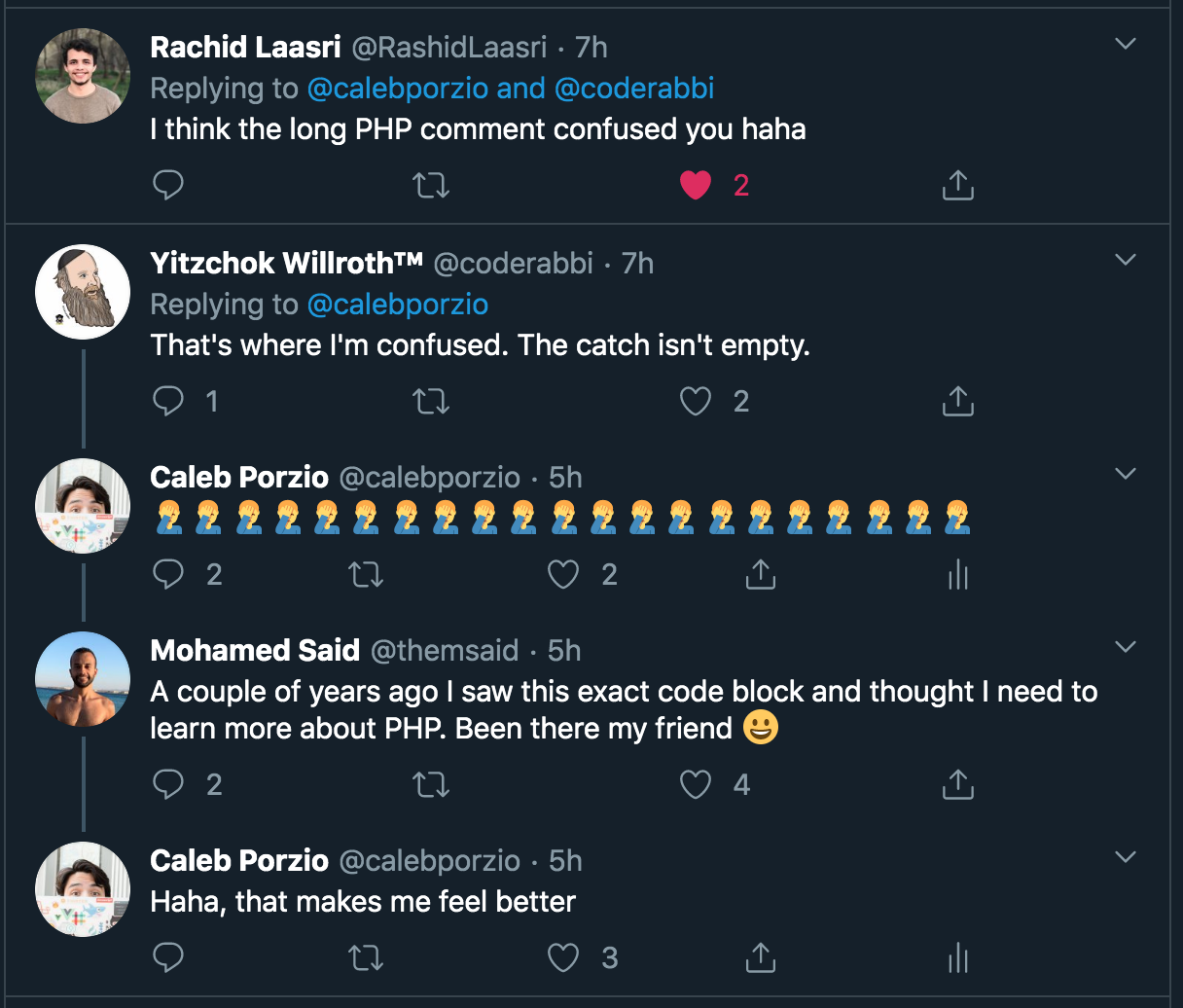 So what happens next. What do I do? Well, here’s what I’ve learned over time:

Learn for next time.

As tempted as I am to delete the tweet while people still think I’m a genius, the reality is, I’m a cotton-headed-ninny-muggins fumbling my way through things like everyone else (maybe not some of you, idk…). I’ve learned that being dumb and covering it up, exposes much uglier traits: insecurity, dishonesty, cowardice.

I’ve learned it’s better to be dumb and laugh at myself (along with everyone else) than take myself too seriously and cover up my mistakes.

Ok, ok, I could see myself reading this and thinking: “Ok, big deal, you missed an obfuscated catch statement. Dumb? I’ll show YOU dumb. I accidentally put my cat in the wash AND dried him!”

You’re right, not a huge deal, let’s try another.

Earlier this week, I wrote a test, named a specific variable $stub, thought it was sexy, decided to tweet it out: 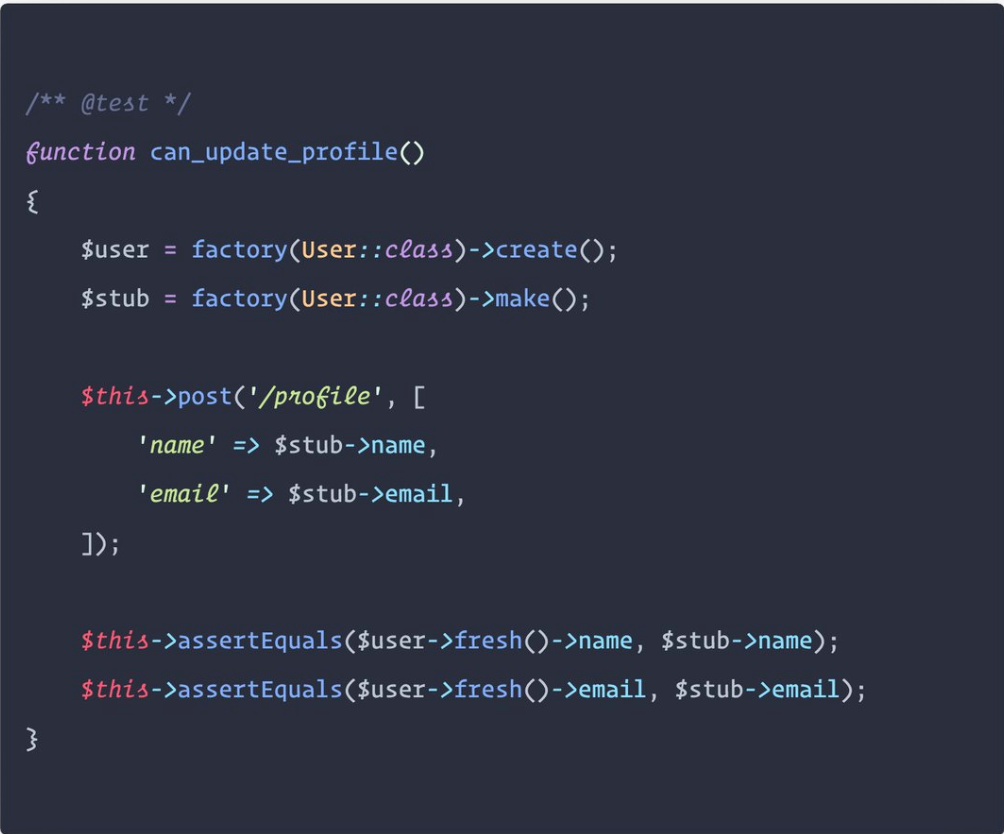 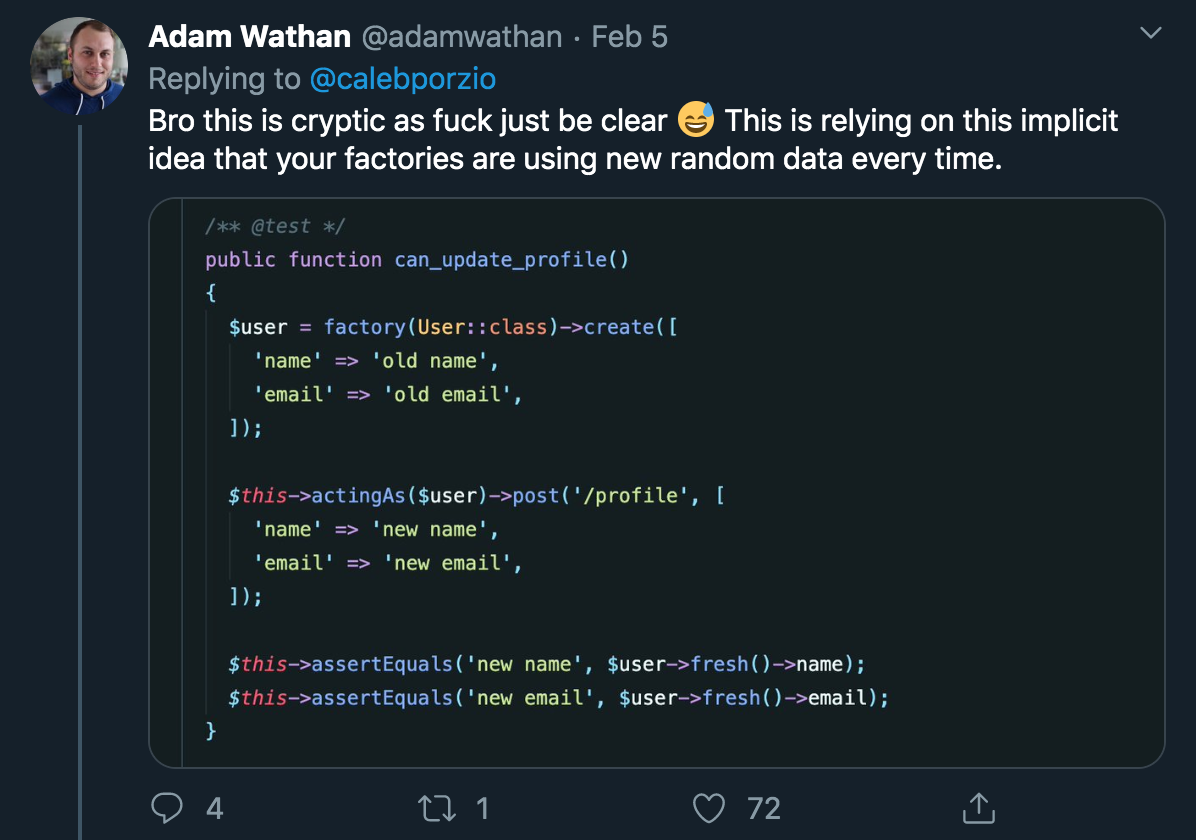 Well-respected Adam Wathan literally replies saying “Bro this is a cryptic as fuck” to my tweet showing off how awesome I think I am.

After two seconds of pondering this, I realized he’s right (mostly/sorta/kinda).

Again, I feel the urge to delete the big shiny tweet where I proudly show off something about testing and the author of “Test-Driven Laravel” dismantles it immediately in the first comment.

I mean, people literally pay me to show them how to write tests. How does this look?

But I know better now. I know what I have to do.

Calm the ef down, evaluate if his response actually IS valid, if it isn’t, then hash it out, if it is, submit to the better information and learn for next time.

But the important thing is DON’T RUN AWAY. Get better. Take the hit. Be humble. Learn. Laugh.

Also, to be clear, Adam’s a friend and super nice guy and he’s mostly yanking’ my doodle . He just happens to be one of those rare people who’s super opinionated and *usually right. He literally DM’d me just to tell me he felt bad for ruining my Twitter day. What a dude.

Anyhow, there’s plenty more where that came from.

There are lots of other times I've tweeted something out only to be told a minute later that I’m totally wrong, or totally confused, or just plain ugly (those ones hurt the most).

If you’ve ever said or done something dumb publicly, let me be an example to you.

We’re all dumb (except Adam, jerk).

Let’s eat, drink, and be idiots, Together, Caleb

*Adam was happy with Stimulus. Idiot.