My buddy Jonathan Reinink has been working on a cool project called InertiaJS. It attempts to provide all the UI-gravy of a SPA while handling routing and data fetching the good old-fashioned way. I think Jonathan Reinink and I are cut from the same cloth when it comes to our love of pragmatic Laravel apps and distaste for needless indirection.

I gave a talk last year at Laracon called "Embrace the Backend" (watch it here), that captures this philosophy, and more recently, he wrote a blog post called Server-side apps with client-side rendering that gets after these same concepts.

Warning: Inertia isn't actually "out" yet, but the repos are public. I checked with Jonathan about posting this video and he was cool with it, but be warned, it's not ready for prime-time yet.

My initial motivation for playing with it was to see if Livewire could work with it. That was a derp, with Inertia, there is no Blade, so Livewire's out, but it's still a good walkthrough of Inertia, enjoy!

After Jonathan watched the video he had the following messages for you: 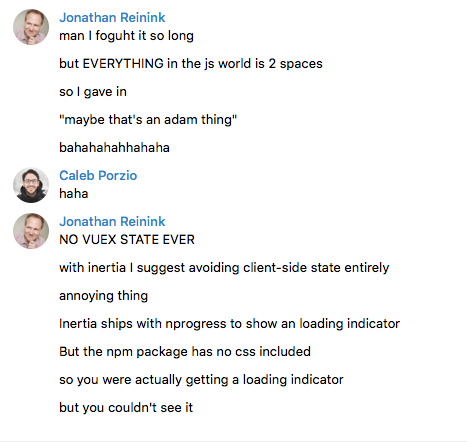